Kathy has been in Dentistry for 42 years, in which 35 were spent as a registered dental hygienist, and have now found that Orofacial Myofunctional Therapy is the profession of my dreams. Combining the knowledge that I have in dentistry with Orofacial Myology and restorative breathing has been rewarding in achieving results to create a harmonious environment in which the oral structures can grow and develop properly and become stable.

Helping prevent and minimize cranio-mandibular dysfunctions can be life changing for patients. Kathy finds it rewarding to help patients of all ages to achieve proper oral postures and functions.

A balanced face is a more attractive face

Individuals who exhibit OMD frequently have poor eating/chewing function and appearance in that they chew their food with lips open and often swallow foods whole because of inadequate chewing function. If the mouth is used as an airway apparatus chewing becomes secondary to airway hence the open mouth to breathe over the food and inadequate chewing.

Habitual open-lip resting posture (lip incompetence), which is common among individuals with OMD, removes the beneficial influence that closed-lips have on the development and maintenance of good dental arch form and can have a negative influence on eruption and drifting patterns of teeth. An open mouth posture also dries the oral mucosa and can contribute to gingival and periodontal problems. Individuals that breathe through their mouths are also more prone to dental caries. Oral breathing has many other health implications.

The restorative breathing and promotion of nasal breathing can help with a plethora of health problems. Hidden chronic hyperventilation has many side effects such as brain fog, anxiety, asthma, allergies, nasal congestion, snoring, and may contribute to sleep apnea. Addressing the breathing may help overcome some of these maladies. There is often a team approach to this between Dentists, Orthodontist, ENT’s, Allergist, Osteopath, and even Nutritionists when needed to address the issues.

What are the Consequences of OMDs?

These abnormal habit patterns, functional activities, and postures can open the dental bite beyond the normal rest position. This can result in a disruption of dental development in children and over-eruption of selected teeth in adults.
Over time, dental malocclusion, cosmetic problems, and even changes in jaw growth and position are observed in some patients with OMDs. Examples of changes that can result from a chronic open mouth rest posture include an increased vertical height of the face, a retruded chin, a downward and backward growth of the lower face (rather than downward and forward), and flaccid and hypotonic lips (Proffit, 1986)

Research has revealed a high incidence of speech problems in those individuals who exhibit OMD. The /s/ sound is the most common, others are /z/,/sh/, /ch/,/j/, /t/, /n/ and /r/. When there is a combination of OMD and related speech errors, it is often difficult to correct the speech problems through traditional speech therapy alone.

How Prevalent Are OMD’s?

Recent research examining various populations found 38% to have orofacial myofunctional disorders and an incidence of 81% has been found in children exhibiting speech/articulation problems. (Kellum,1992;Maul et.al.1999).

What is Orofacial Myofunctional Therapy?

Therapy involves an individualized regimen of therapeutic oral and facial muscle exercises to develop correct chewing and swallowing patterns as well as tongue and lip resting postures. Many therapists also provide motivational therapy to eliminate harmful oral habits such as: 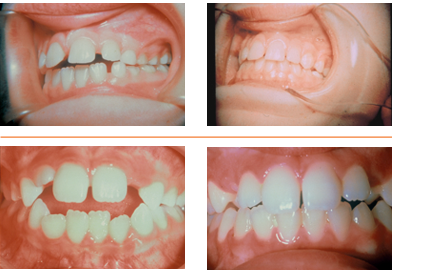 Nasal breathing and a lip seal is a major goal of Orofacial Myofunctional Therapy as well as recapturing the normal freeway space. The freeway space is characterized by a small open space between the upper and lower teeth (the normal dental rest posture of about 2-3 mm at the molars, and 4-6 mm at the incisors.) (Sicher and DuBrul, 1970)

Restorative breathing normalizes the breathing to match the metabolic activity and can be helpful to remove this as an etiology before or during Orofacial Myofunctional Therapy if needed.

How Effective is Orofacial Myofunctional Therapy?

Orofacial Myofunctional Therapy has helped literally thousands of individuals, in dozens of countries, for over 30 years. Numerous studies have demonstrated its effectiveness including a recent study done by Hahn &Hahn (1992), which revealed that treatment for orofacial myofunctional disorders can be 80-90% effective in correcting swallowing and rest posture function and that these corrections are retained years after completing therapy. Numerous studies have also demonstrated the efficacy of orofacial myofunctional therapy in facilitating speech therapy.

Compliance is paramount in achieving these goals.